The game allows players to create a character avatar and explore an open game world, exploring the landscape, fighting various monsters, completing quests, and interacting with non-player characters (NPCs) or other real-life players.

The current player base has struggled for years to enjoy a holistic in-game experience as it relates to tracking their current Achievement earning progress.

Following extensive questlines is a key fixture in MMO gameplay, the problem voiced by players in forums like WoWHead and Icy Veins, are the inconsistencies of the user's quest experience across expansions.

In an Open World game as large as Azeroth, this problem goes beyond reasonable game time desirability and quickly puts players in a needle in a haystack scenario.

With an average site activity of 10.5million* visits per month, WoWHead is commonly referred to as a key game guide for WoW players. While there is no perceived financial partnership between Blizzard Entertainment & WoWHead, Blizzard's customer service often defaults to direct players to WoWHead as a resource for finding answers. While external forums will always exist among MMO games, WoWHeads seems to be a bandaid to a larger problem Blizzard has with its questing/achievement tracking user experience.

“Often, I spend about half of my time using WoWHead to find where my next quest is or why I can’t find it, more than I do playing the quest chain itself.” - WoW player since 2016

Design Goal - The focus of this design is to add a feature that will improve users' experience in locating & tracking questlines to earn achievements.

Player Goal - This added feature should ideally remove the need for players to seek external forums (like WoWHead or Icy Veins) to check their progress / the location of achievement quest lines. Experienced players would feel focused during quest grinding to receive unlock rewards, and new players would be guided from getting lost playing through older content/expansions.
‍
Business Goal - The success of the player goal should create a higher impact on player engagement satisfaction, reduce the number of players abandoning alternate characters, and reduce quest/achievement customer support tickets.

The majority of players prefer Completion and Collecting play styles, both heavily dependent on questline tracking.

84.7% of players are dependent on an external resource in order to navigate questing more than 3 times/month.

Players (new & experienced) are unsatisfied with the current organization of quest tracking in-game. 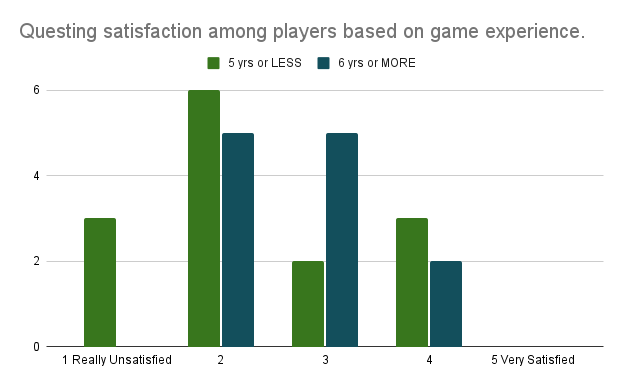 Key Details from Persona "Player Card" below:
~ Extensive experience playing the game.
~ Identifies their playstyle as being a completionist
~ Is goal-driven. 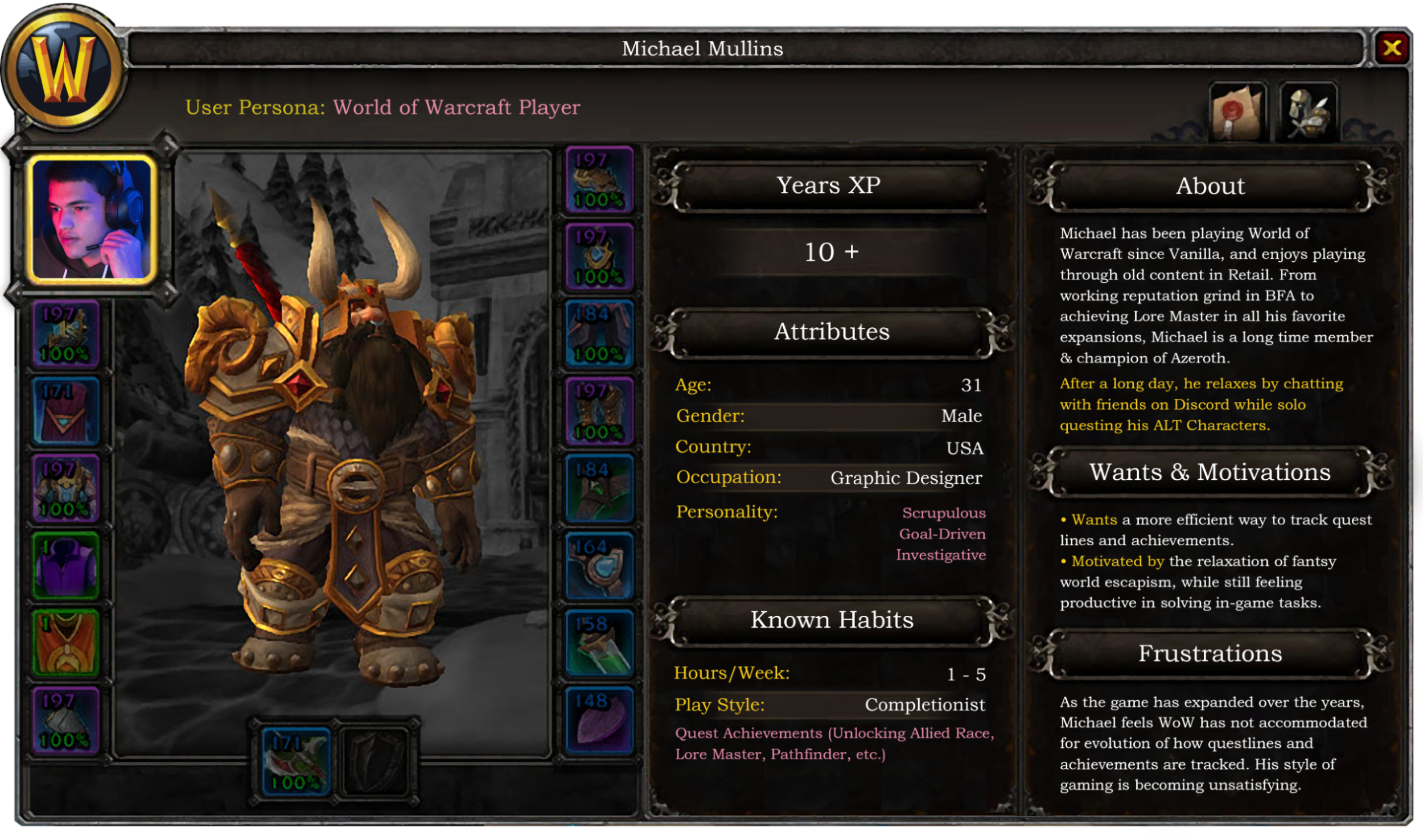 Based on the demographics & survey responses collected via user survey.

Players (new & experienced) are unsatisfied with the current organization of quest tracking in-game.

Players need an organized and sequential quest achievement log, so they can complete and collect desired in-game content.

How might we improve in-game quest & achievement tracking, so that players have more satisfying game completion and collecting experiences?

Players (new & experienced) are dependent on external resources in order to progress through quest achievements, causing them to feel frustrated or give up.

Blizzard needs to increase questing satisfaction among new and old users in order to keep players engaged in a holistic WoW brand experience.

How might we motivate players to feel focused and satisfied in their quest tracking, so that they remain engaged in World of Warcraft and not pushed to external resources or persuaded to join a competitor MMO?

Below are a series of hand-drawn solution sketches next to images of the current in-game screens.

After extensive brainstorming in WoW's achievement structuring and comparing to other major MMO competitors, I began extensive solution sketching that could add improvements to the current system of quest/achievement tracking, as well as to narrow down a clear wireframe flow for user testing.

Creating a high-fidelity prototype that simulated logging-in to your character.

Many people find comfort in what they already know - These new features should not require users to learn a new flow, but rather build off existing familiar patterns. 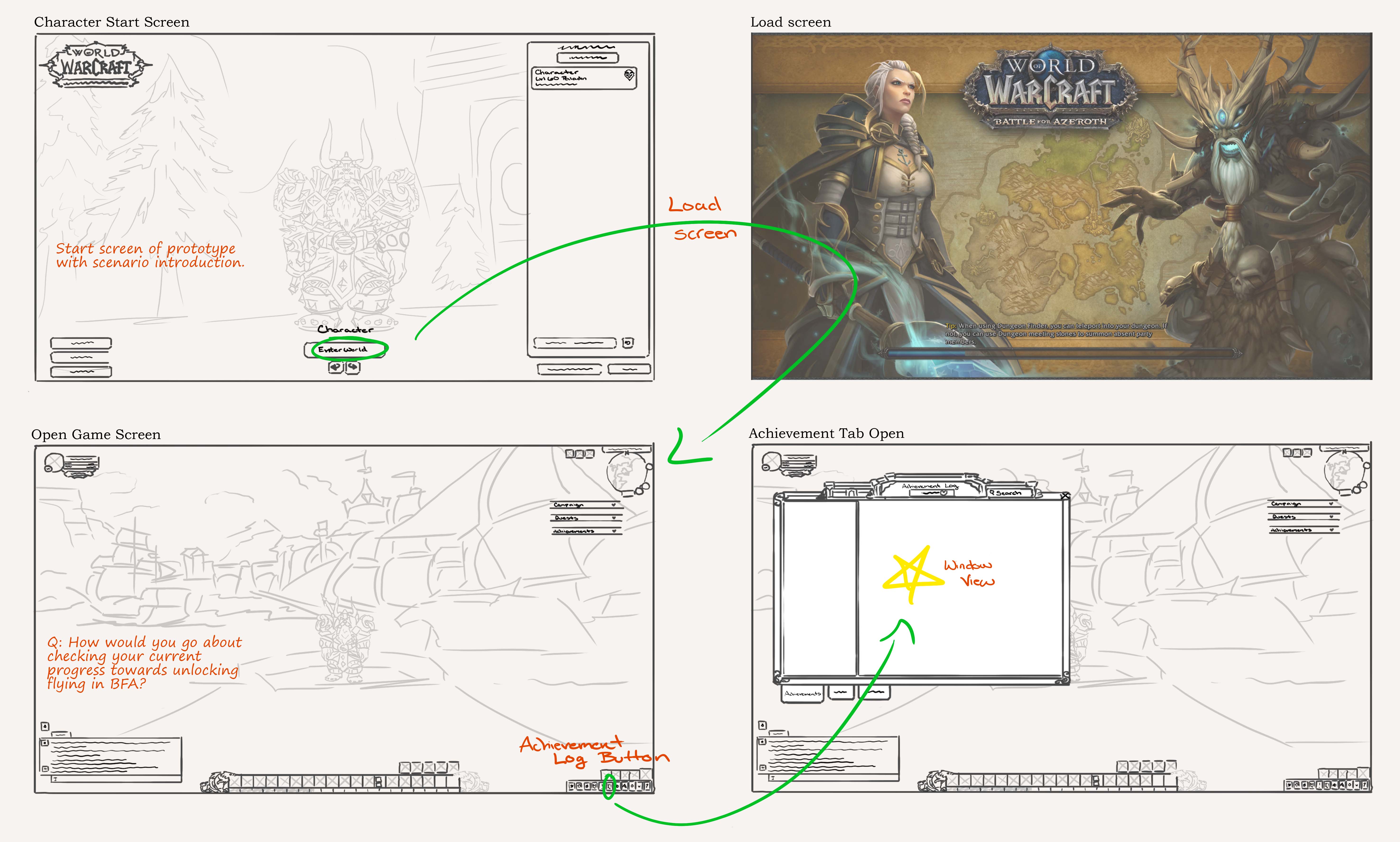 Redesigning the structure of the summary page in the Achievement window in order to include new Achievement Tracking slots.

The addition of progress bars appeals to a user's Completion Bias.

Since new Achievements are added in new expansions & patch updates, consolidating achievements retroactively could be confusing to the community and would not be the best use of developers' time.

Adding UI signals such as progress bars is a low effort/high impact solution, that can be added to existing older content while creating a great template for future content releases.

Achievements are listed in the Achievement log. However, the Map/Quest Log is how the player finds WHERE and WHAT to do to complete those Achievements.

The design solution for the Map/Quest Log is a folder filter system that separates quests and tasks that are specifically needed in order to complete a given selected Achievement. 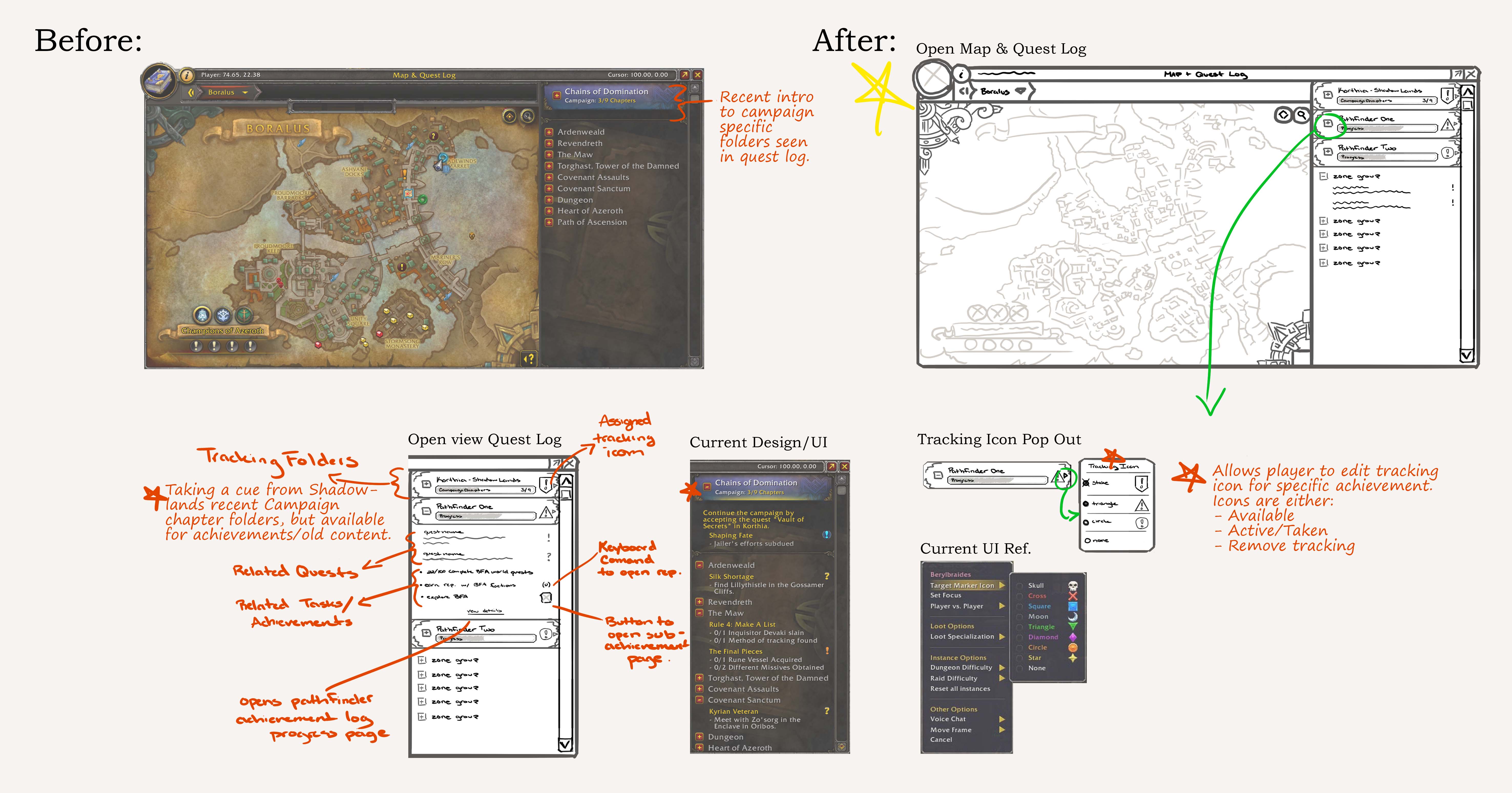 The below wireframe flow was created to plan the Happy Path - Ideal Priority Order for prototype user testing. 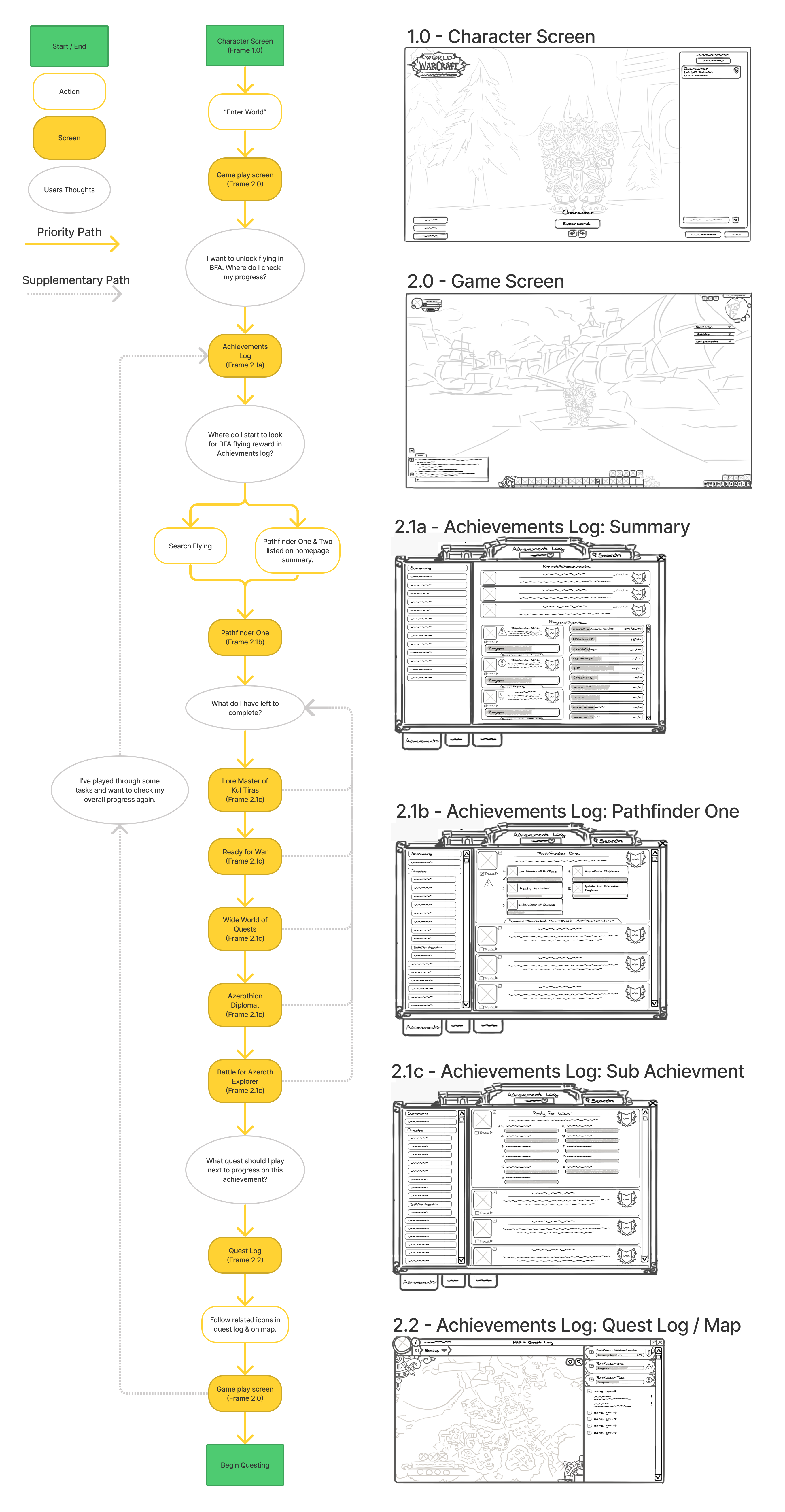 **The following prototype was entirely illustrated by Monica Kay based on existing in-game UI standards. **

Test Objective — Task Completion & Participant Emotional Response.
‍
‍Test Goals —
A.) Players express clear emotional responses of satisfaction with the new organization of how Achievements and Quests are tracked in-game.
‍B.) Players don’t feel the need to use an external resource in order to understand what to do next.
‍
‍Test Methodology — Guided 1:1 Interviews

‍Participant Recruitment Plan: Participants have at least 6 or more years of experience playing the game and enjoy questing/achievement earning as their primary focus of game-play. 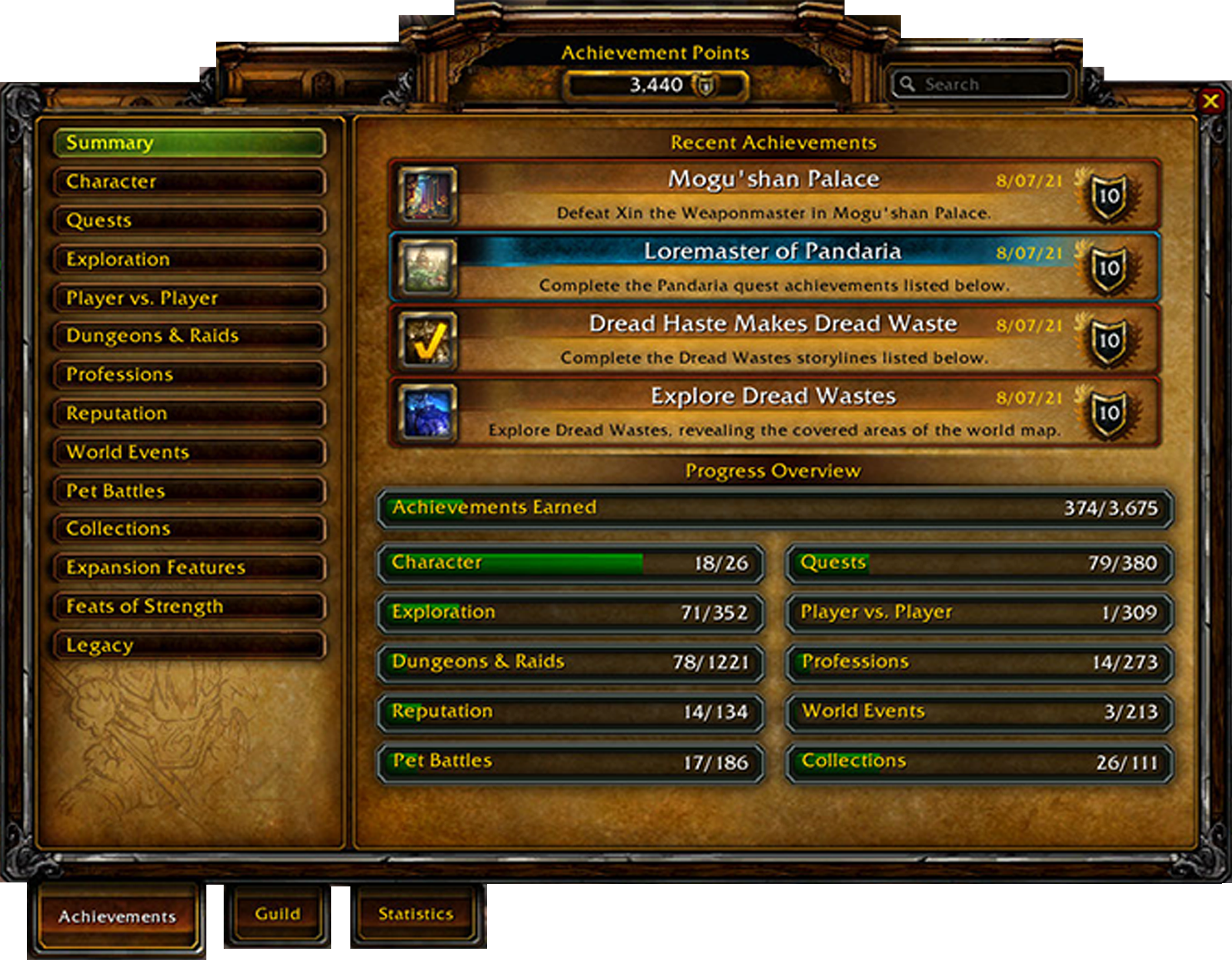 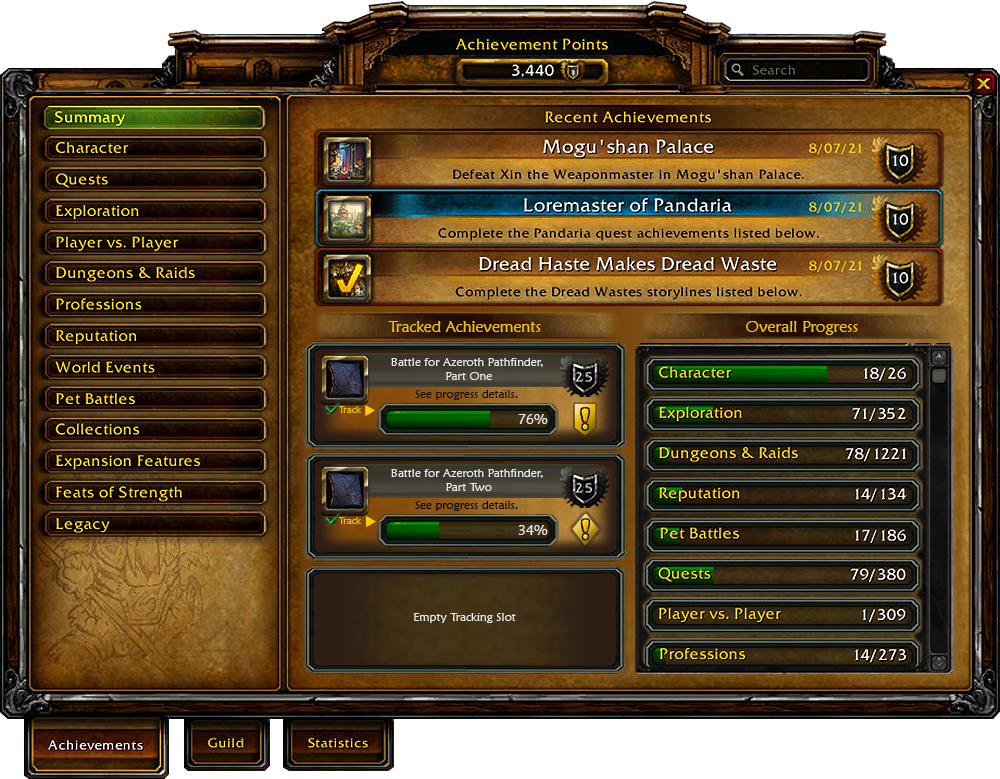 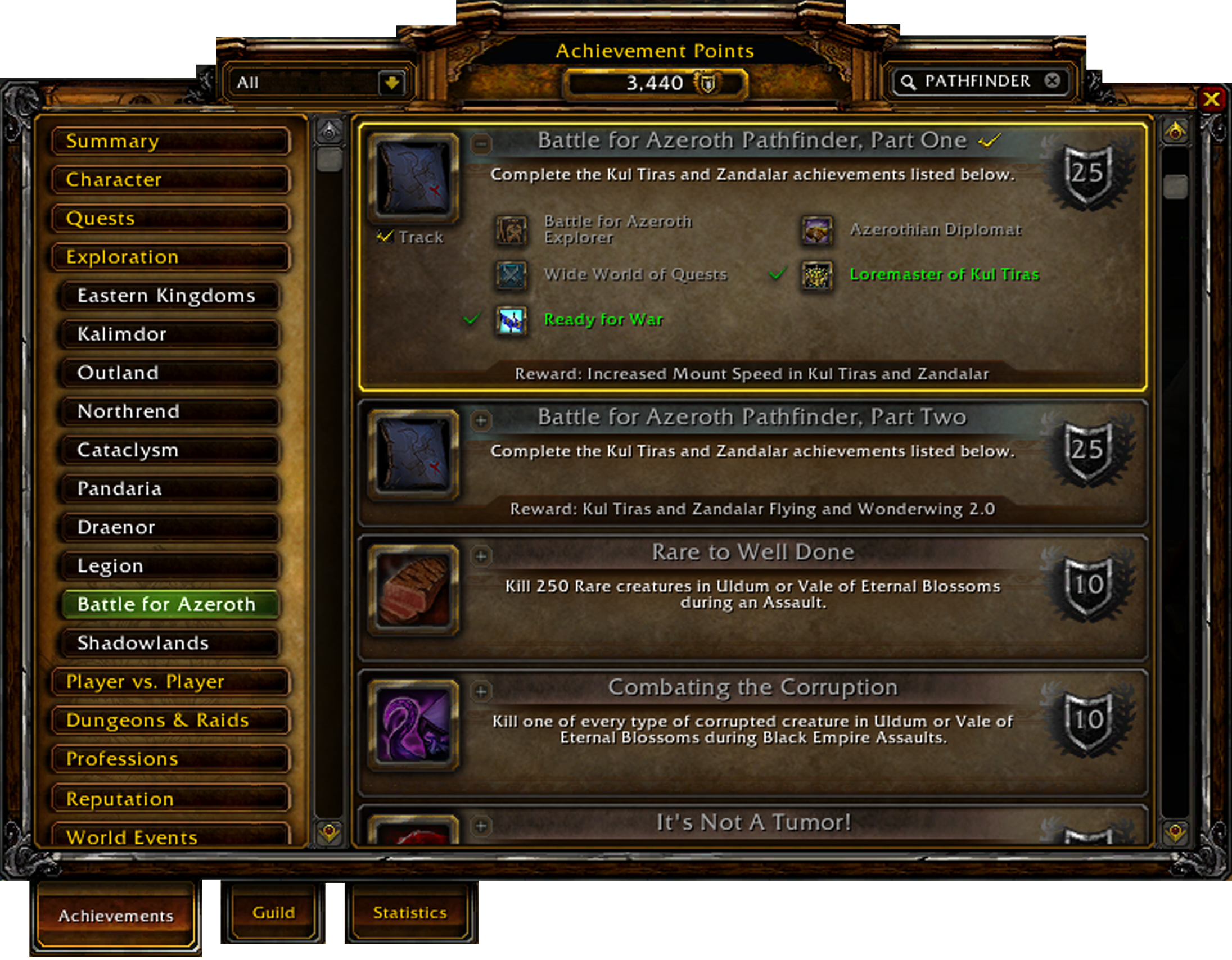 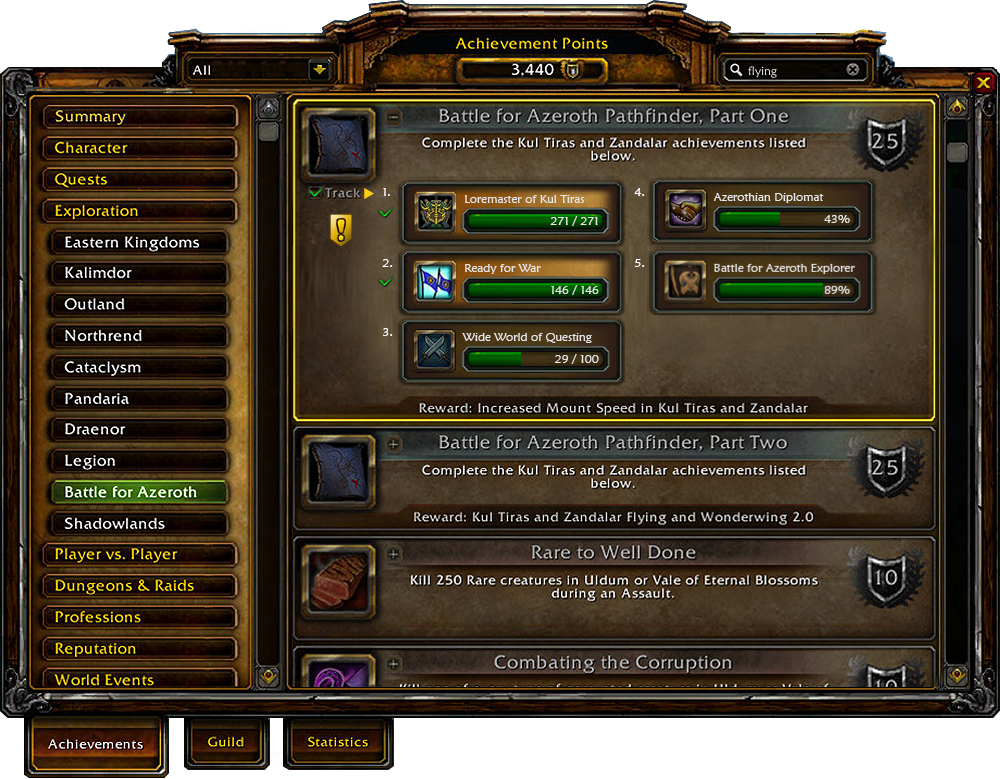 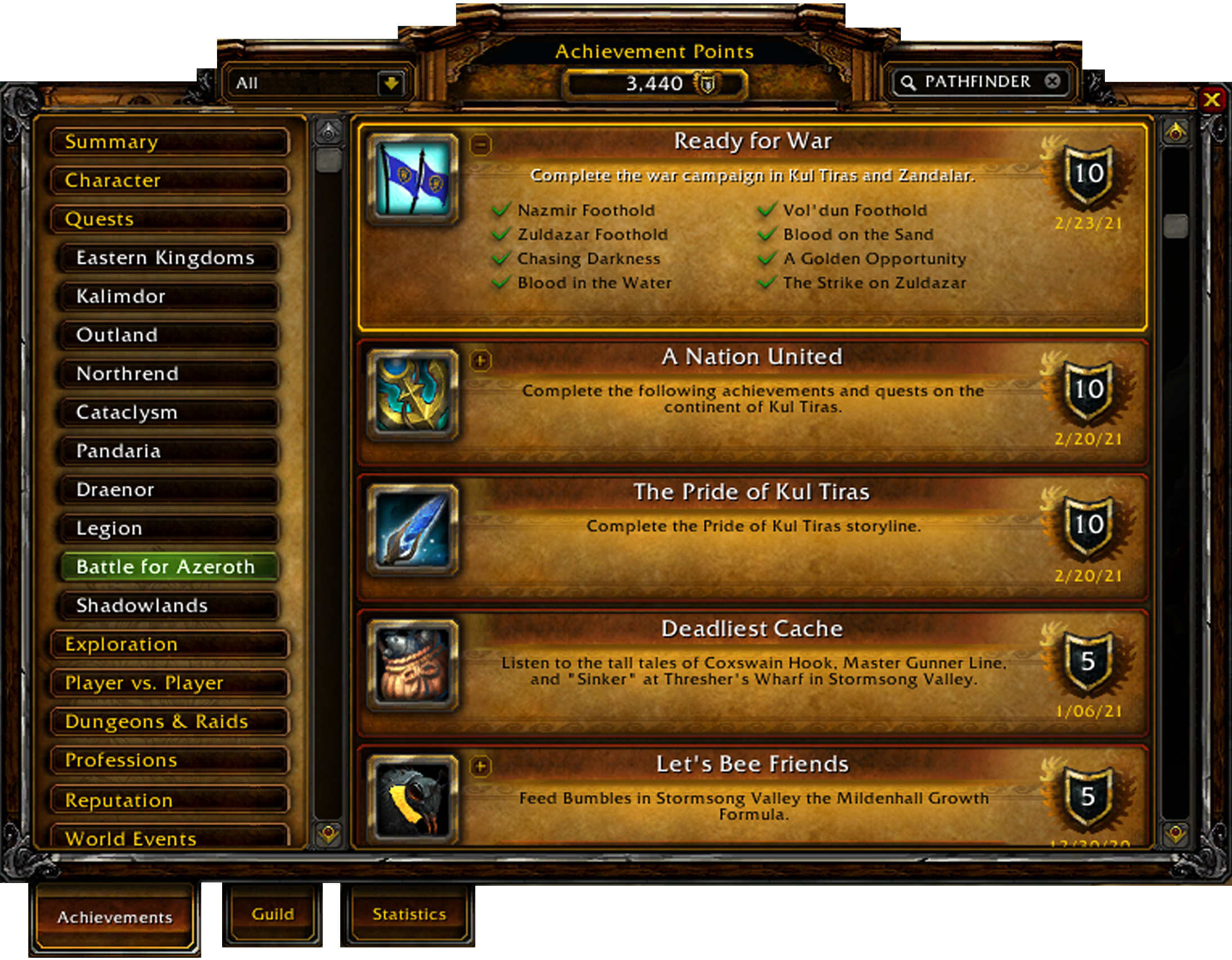 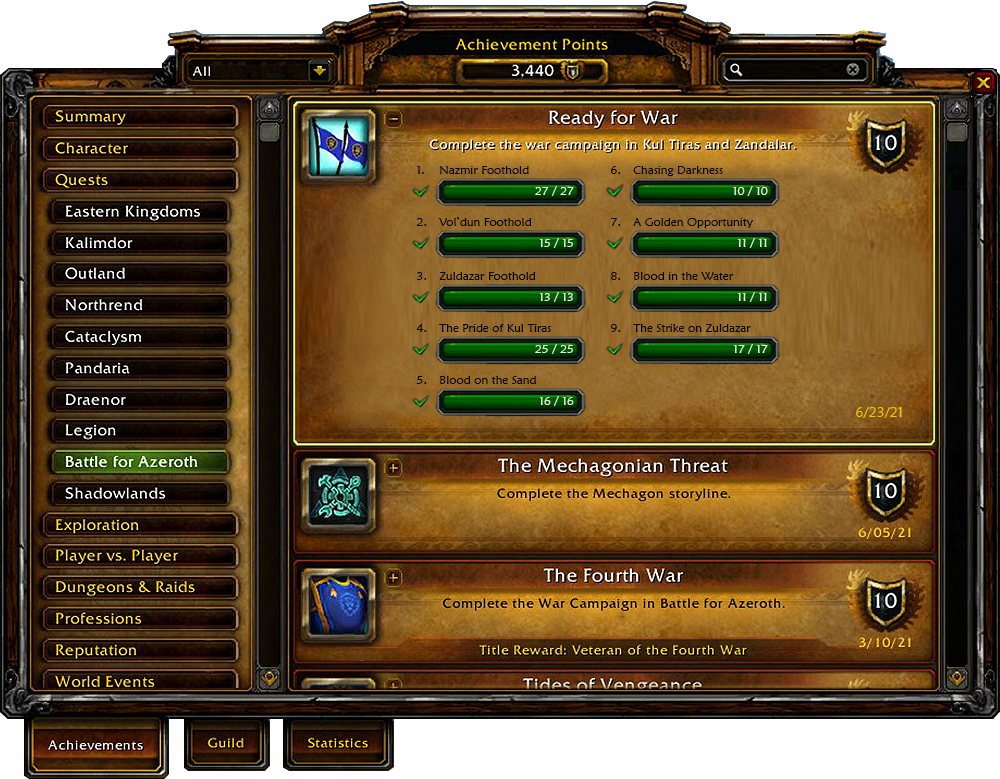 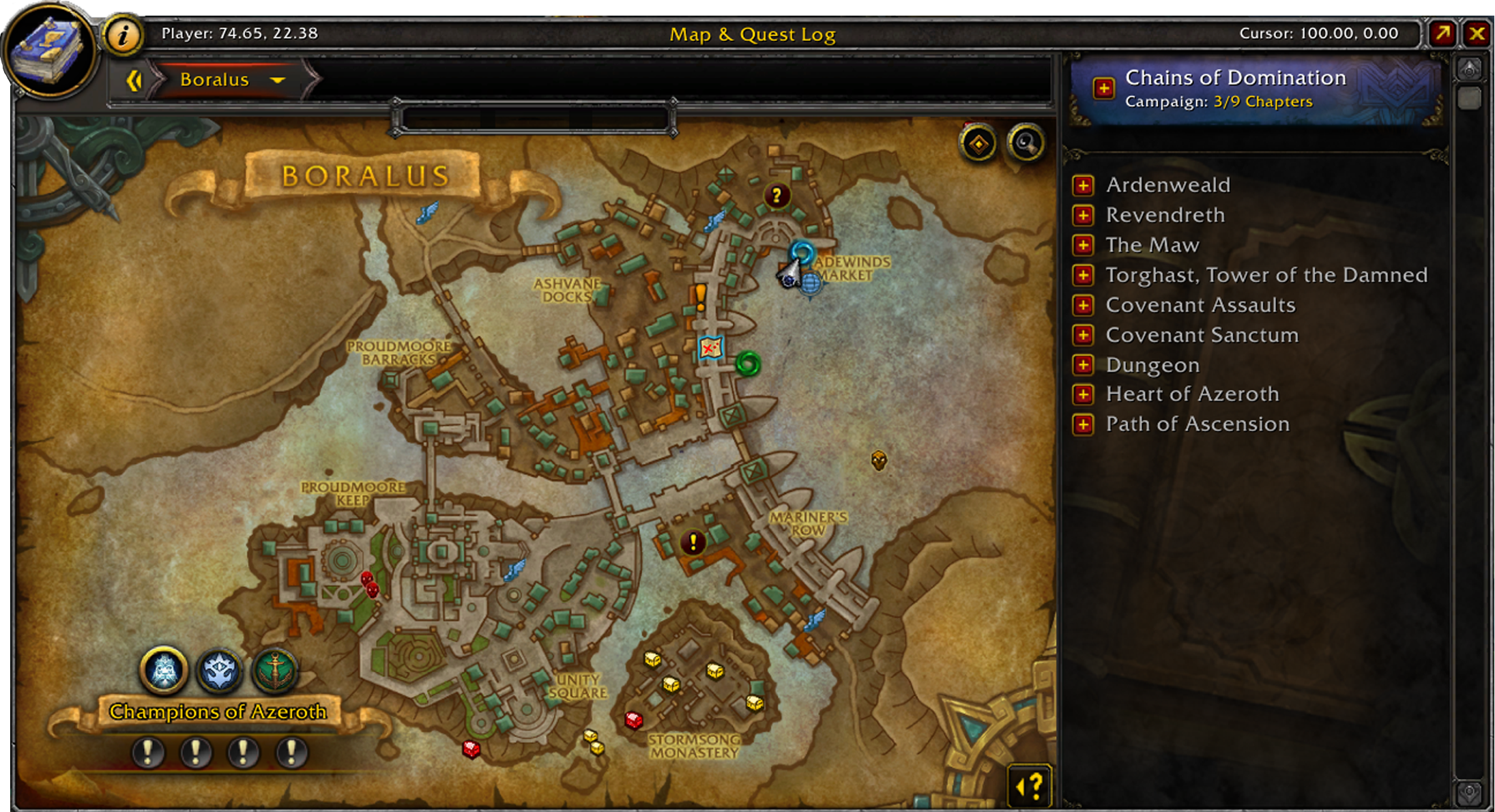 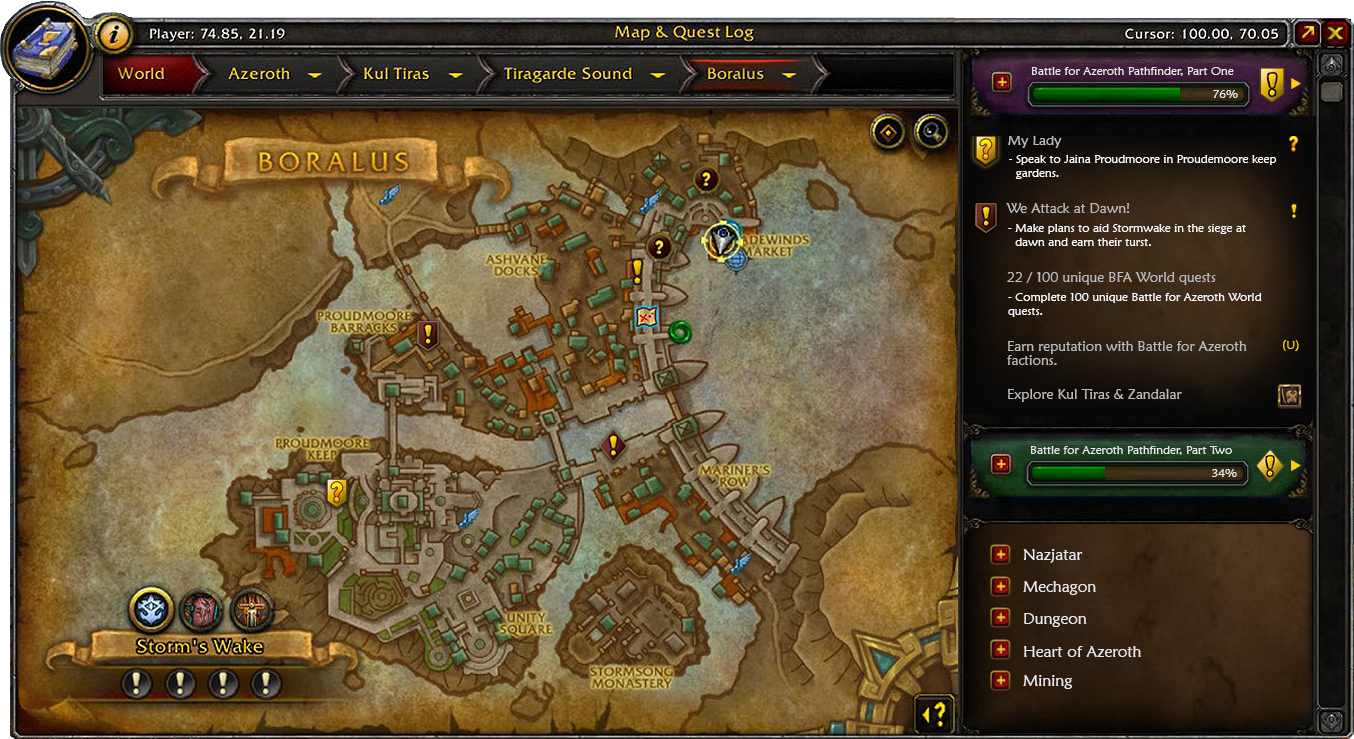 Participants showed a positive response to the new UI additions and expressed how the improvements would increase their satisfaction with how they currently track quests/achievements.

“That’s a (pun intended) game-changer!... I want this to be in the game so that I can use it. I think it would be enormously helpful.”

“This would be amazing if these were all real! It satisfies so many of my current play style habits that I wish it could be this easy.”

“This is great for when people are feeling overwhelmed or when they finish a storyline and want direction. Like, ‘Well, what do I do now?’ So then they're going to go and start working on their achievements that they haven't done.”

The new features reduced the participants' need for external resources.

“I would use it a lot less for tracking or figuring out where I'm going, which is often why I'm using it to help with these achievements.”

“This would have been so helpful for when we were trying to unlock [an achievement] and couldn’t find what quest we needed to do.”

Progress bars were a success among all participants.

“Progress bars are super satisfying in this game. I love the idea of implementing that system for achievements in this way.”

“I like these chunkier progress bars and the numbers [percentage or count]. I like being able to actually see it within the Achievement or Quest line itself.” 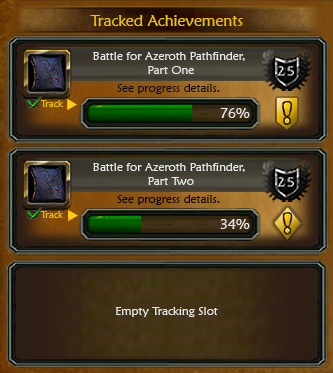 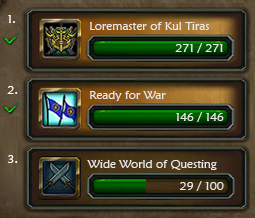 UI elements were familiar and easy to understand among participants.

“It's very easy to navigate. The new elements fit right into the flow that we’re already so familiar with, in WoW.”

“It's clean. It’s designed in such a way that it fits within the already existing, familiar user interface. I think it's great.”

During user testing, there was a hiccup where a participant did not realize they had the option to choose a custom Icon for tracking. This is a specific aspect of the new features added that could use iterations and future testing to improve the recognizability of the icon's custom settings, as well as the accessibility of different icon shapes and colors.
‍
Due to the positive responses of the remaining UI features, it would be worth implementing into a beta test with a larger user base, rerun the initial survey and measure how satisfaction ratings differ.
Additionally, user testing was conducted among power users, yet there is an opportunity to see how these features impact new users, and the possibility of identifying other UI pain points.